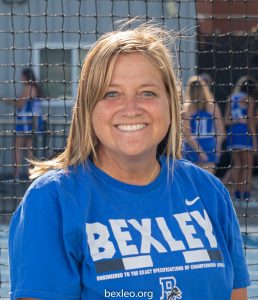 Coach Kara Whitlatch was named 2019 OHSAA Field Hockey Coach of the Year during Sunday’s District Tournament draw meeting. One of five nominees, Coach Whitlatch garnered the most votes from coaches spanning the state. The award not only honors her tremendous efforts and the positive impact she makes on Bexley student-athletes, but also the value she brings to student-athletes who play the sport of field hockey across Ohio.

Two Ohio High School coaches nominated Whitlatch with high praise. One coach stated, “Kara has always been available to answer any sort of question that a new head coach might have at a moment’s notice. It’s fun to compete against Kara’s teams because her teams understand the idea of being competitive and being sportsmanlike.” Another remarked, “She is always willing to do whatever is needed for central Ohio field hockey as well as for the State… I think the respect a team shows to other teams and officials is a direct reflection of the coach.”

Over 15 seasons, Coach Whitlatch has amassed a record of 155-100-14 but her winning percentage isn’t the most impressive part of her resume. She served as the secretary of the Central Ohio Field Hockey League before becoming President of the Ohio Field Hockey Coaches Association and this year, organized the Senior All Star Game. Coach Whitlatch has coached 45 Academic All-Americans, seven Division I players, nine Division III, eight All-Ohio selections and one Junior Olympics Selection. To go along with two Central District Coach of the Year awards in 2010 and 2012, this marks her second OHSAA Coach of the Year award, the first coming in 2012.

Catch Coach Whitlatch and the Lions field hockey team (13) in action as they travel to Olentangy High School (9) to begin the first round of District Tournament play on Monday Oct. 14. If the Lions win, they will be hosted by Olentangy Liberty High School (5) on Wednesday Oct. 16.