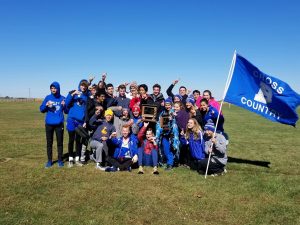 BEXLEY, Ohio – The Bexley Boys and Girls Cross Country teams won the 2019 Mid-State League (MSL) Championship on Saturday, Oct. 12 at Buckeye Valley High School in Delaware, Ohio. The boys won with an official team score of 39 while the ladies won with a score of 31. Claire MacDonald came in first place in the girls event with an impressive time of 19:31.3 while Miles Feinknopf helped lead Bexley’s boys to victory with a time of 17:18.2.

For the girls, this marks their fourth consecutive MSL championship. They had their work cut out for them heading into the meet as newcomer to the league, Buckeye Valley was ranked top 10 in Ohio. Coach Eric Acton said, “Our girls had their hands full but worked hard to compete with some of the top runners in the state.” The girls team scored 13 points lower than Buckeye Valley to win the championship.

This is the first MSL Championship for the Boys team since 2014 after a devastating three-point loss to Columbus Academy last year. Coach Acton said of the boys team, “I’m so happy for them because they deserve this… Miles Feinknopf did a great job of leading the boys all year long to make sure they were able to top the Vikings this year.” The men’s team not only topped the Vikings, they scored 24 points lower than Buckeye Valley for this year’s championship.

The clean sweep of Boy’s and Girl’s MSL Championships come in Coach Acton’s fifteenth year as head coach of Bexley’s cross country team. When describing this year’s teams, Coach Acton had this to say, “Hard work beats talent when talent doesn’t work hard, and these kids have worked hard all season to earn this.”

Click here to view the full results from this past weekend’s MSL Cross Country Championships: https://www.athletic.net/CrossCountry/Results/Meet.aspx?Meet=159934&show=all