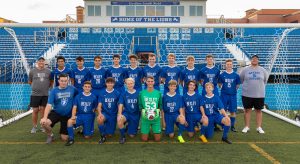 The Lions improved to 7-9-3 overall and earned a spot in their second straight OHSAA District Final match in as many years, while the Centennial Stars season ended at 7-5-3.

Early on, the Stars were able to keep the game close with help from a core of defenders who were able to spray the ball out of the mid-field at will.

The Lions continued to pressure the Stars defense leading to a gritty goal scored by freshman defender, Grayson Fletcher, from a corner kick midway through the first half. The pace and size of the Lions offensive attack proved to be too much for the Stars to handle.

In the second half, senior captain, midfielder Miles Goldman all but cemented the victory with a 30-yard left footed “rocket” goal that soared over the Stars keeper’s outstretched hands into the upper 90, giving the Lions a 2-0 lead. One minute later, Goldman contributed again by sending a corner kick into the box where sophomore midfielder Max Hartman connected, extending the lead to 3-0. To round out the scoring flurry, junior forward Charlie Breyfogle got behind the defense and beat the keeper to make it 4-0 with three minutes remaining.

Fans at Carlton Smith Field celebrated the win over a very talented Centennial team as well as the accomplishment of making it to back-to-back District final matches.

For information regarding the time and location of Saturday’s match up, visit https://bexleyathletics.com/teams/2724655/boys/soccer/varsity or check out the Bexley Athletics Twitter page: @BexleyAthletics.

For a full look at the Division II, Region 7 District bracket, visit: https://officials.myohsaa.org/Admin/Bracket/PublicBracket?TournamentId=1095