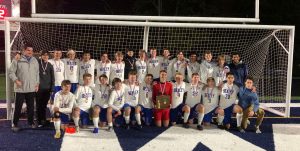 BEXLEY, Ohio – The Bexley Boys Soccer team battled the elements to win its second straight OHSAA District championship in as many years after defeating Bloom-Carroll High School, 2-1, on Oct. 26 at Bishop-Hartley High School.

The Lions keep their regional championship hopes alive by improving to 8-9-3 overall, while the Bloom-Carroll Bulldogs 2019 campaign ended at 12-6-1.

The highly anticipated Mid-State League rematch featured a Bloom-Carroll team who beat the Lions 2-0 on Sep. 5, while in the midst of their most impressive season in ten years. With all signs pointing to another Bulldog victory, the young and resilient Bexley team started the game firing on all cylinders; controlling time of possession and accumulating three times more shots on goal than the Bulldogs.

The Bulldogs held off the Lions’ all-out offensive attack till just before the end of the first half when a perfectly executed corner kick was met by an explosive header from junior defender Jaxon Remeis that put Bexley up 1-0. Shortly later before halftime, junior midfielder Yonatan Ligator cut through Bulldog defenders, extending the lead to 2-0 before a questionable offsides call took the goal off the board for the Lions.

Only down a goal, Bloom-Carroll came out with a renewed energy in the second half that led to an early equalizing goal to tie the game at 1-1. The better part of the second half was a competitive back and forth battle before sophomore midfielder Nick Eddy’s blistering pace became too much for the Bulldogs defense. Bexley’s coaching staff said of Eddy, “he was living behind their backline,” and in the waning minutes of the game, Eddy found junior forward Charlie Breyfogle cutting in front of the 6-yard box where he was fouled resulting in a penalty kick.

Bexley’s staff made the decision to put the game at the foot of Yonatan Ligator who had a goal taken away in the first half. With both teams standing outside the box watching the one-on-one match up, Ligator buried the PK in the top left corner giving Bexley the lead and their second straight District Championship.

Look Ahead to the Regional Semifinals

The 2019 OHSAA Division II, Region 7 Semifinal is another Mid-State League rematch against rival Columbus Academy (1). Columbus Academy defeated Granville (3) 1-0 to become Region 7, Central 1 District Champions. The Lions (4) and Vikings played earlier this year on Sep. 7 resulting in a 1-1 tie. The Regional semifinal match will be played at Westerville Central High School on Wednesday, Oct. 30 at 5:30 p.m.

For more information regarding the Wednesday’s match up, visit https://bexleyathletics.com/teams/2724655/boys/soccer/varsity or check out the Bexley Athletics Twitter page: @BexleyAthletics.

No Events This Week

Events are added by athletic staff.
View All Events