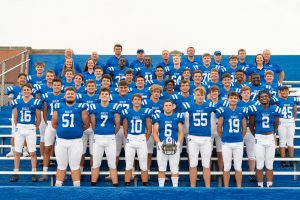 The Bexley Football Program made great strides this season under 1st Year Head Coach Mike Golden. The Varsity Team finished 3-7 on the year (2-5 in MSL), and the JV Team finished with a record of 3-3-1. The 3 wins for the varsity team are the most since 2016 when the Lions went 11-1. The JV team played more games this year than they did the last 2 years combined.

Senior Troy Redmond led the Lions in Rushing Yards this season with over 600 yards. Senior Patrick Beck was second on the team, totaling over 500 yards on the ground. Beck scored 8 Touchdowns on the season, and Redmond accounted for 4.

Junior Michael Agriesti was the leading receiving for the Lions and Beck was second in catches this season.

Freshman Quarterback Jonathan Spiess led the team is passing yards this season after having to step in after Junior Tommy Bloebaum went down with a season ended knee injury Week 4. Spiess is the first Freshman to lead the Lions in passing since Jake Kastan did so in 2004.

Junior  Linebacker Grant Sheridan led the Lions with 78 tackles this season, and Senior Linebacker Ethan Fosnaugh was second on the team with 58 tackles. Agriesti led the team with 4 interceptions and Beck recorded 3 fumble recoveries to lead the team.

The Lions are going to greatly miss this Senior Class that exemplified tremendous leadership and grit throughout their entire careers, playing for 3 different coaching staffs, while always remaining humble and putting the team first.