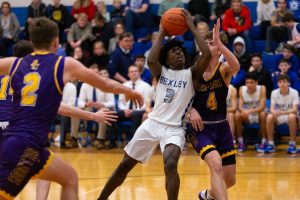 BEXLEY – The Independence 76ers (3-18) took the Lions the distance in Tuesday night’s nonleague matchup but were outlasted by solid defense and clutch shooting down the stretch.

In a run-and-gun first half, the Lions went down 20-15 in the first quarter and went into the locker rooms at halftime down 39-33. 76ers guard, Andre Trent was a staggering 8-for-9 from behind the arc contributing 24 of their 39 first half points.

At the half, Coach Phillips tasked sophomore wing Chris Mitchell with guarding the 76ers leading scorer. Mitchell held to Trent to just 3 second-half points. Major three-point contributions from senior guard Damian Davis, junior wing Cade Phillips and sophomore post Tucker Harpe, the Lions came storming back with a 19-6 third quarter run heading into the fourth quarter up 52-45. Senior big man Bryan Williams was a force on the block in the fourth quarter, totaling seven rebounds on the night.

The final minute of the fourth quarter had four lead changes between the teams. With 15 seconds remaining and the crowd on their feet, Damian Davis made a floater directly in front of the Lions bench. Staunch defense forced a contested Independence miss as the clock ran out and the Lions held on to win 66-65.

You can catch the Lions final regular season game of the season this Friday, Feb. 14 against league foe, Wellington at 7:30 p.m.