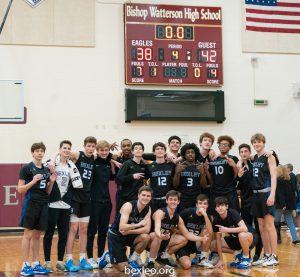 COLUMBUS, Ohio – There were two games left in the regular-season when Coach  Todd Phillips left the Division II tournament draw knowing his team would be facing off against a then 9-11 Bishop Watterson squad.

The Lions went 1-1 in their last two games, winning a nail biter against Independence and dropping a close game to Mid-State League foe Wellington. The Eagles brought their record to an even 11-11 with solid wins over Dublin Scioto and Bishop Hartley to end the regular season. The challenge of playing a traditionally successful and well coached program, on a winning streak and in their building was real. But the 18th-seeded Bexley Lions were ready.

Coach Phillips lit a fire in his guys before the start of the second quarter as they upped their pressure, holding Watterson to just five second quarter points while scoring 10 of their own. This was the Lions best first-half defensive performance of the season and gave them a 22-13 lead at the end of two quarters.

In the third quarter, the Eagles came out of the locker room hitting on all cylinders. Watterson was able to take away open looks that Bexley had in the first half by applying defensive pressure out past the three-point line and held the Lions to just eight third quarter points. At the end of three quarters, Watterson cut the lead to 30-25.

The fourth quarter was a battle that had both Bexley and Watterson fans on their feet.

The teams traded buckets and as time ran down Watterson started fouling to force free throws. Up one-point with 45 seconds left in the game, sophomore big man Tucker Harpe got fouled and sunk both attempts giving Bexley a 38-35 lead. On the next possession, Watterson’s point guard found a wide-open teammate behind the arc who netted a three and the gym erupted. With 30 seconds on the clock and the game now tied, Coach Phillips opted to have his senior  point guard and leading scorer Damian Davis hold for the last shot, putting the Lions post season fate in his hands. Like a kid in his driveway, Davis drove to the left elbow, pulled up in traffic and hit the eventual game winning shot with only 0.5 seconds remaining.

Watterson then threw their baseline entry pass out of bounds giving the ball back to Bexley. The Lions threw the ball into Tucker Harpe who was fouled and knocked down both free throws to seal Bexley’s trip to Sectional Finals.

When talking about the playoff win Coach Phillips said, “Each game is a chance to do something big. I’m so happy for our guys. People will remember D’s (Damian Davis) shot and rightfully so. Our practices were what got us there. On to the next step.”

The Lions will head to Hebron, OH this Saturday night, Feb. 29 to face off against the 17-seeded Lakewood Lancers at 7 p.m. in the District Semi-Finals.

Following a win, the Lions would play either first-seeded Jonathan Alder or 20th seeded Columbus East in the District Championship at 7 p.m. on Wednesday, March 4, location TBD.

For up to date information about the boys basketball team, check out the Bexley Athletics Twitter page: @BexleyAthletics.