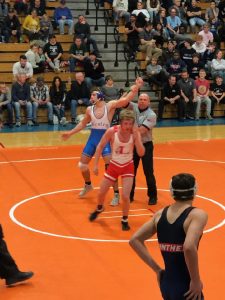 One year ago, Carter Brenner played as big of a role as any member of Bexley’s Wrestling program without having the opportunity to strap on his headgear to win a match. During his junior campaign, Brenner suffered an injury leaving him unable to wrestle. Due to his character and dedication to the program, Brenner was named a captain of the team. While injured, he acted as a coach and provided another set of eyes in the wrestling room throughout the 2019 season making the younger members of the team better.

During his senior football season, Brenner suffered a meniscus tear and had to have surgery but was able to get back to full strength by the end of the season. Throughout the 2019-2020 wrestling season he struggled with nagging injuries but stayed consistent at 138 pounds through the pain.

In his semifinal match, Brenner beat a state ranked wrestler from Granville 6-3. In the sectional championship match, he found himself down one point with three seconds left against another state ranked wrestler. Brenner’s will from within allowed him to escape, scoring one point to force the match into overtime.

In overtime, Carter Brenner took down his opponent to win the match 7-5.

Head Coach Chris Bragg said of his senior captain, “Carter isn’t ranked in the state, but he should be and proved that tonight. This was his first time as a true champion of a tournament. He is a wrestler that no one wants to face because no one knows anything about him since he couldn’t wrestle last season. Carter has studied the sport and is very determined. It was one of the best matches I have been able to be a part of as a coach and we are very proud of him no matter what happens the rest of this postseason.”