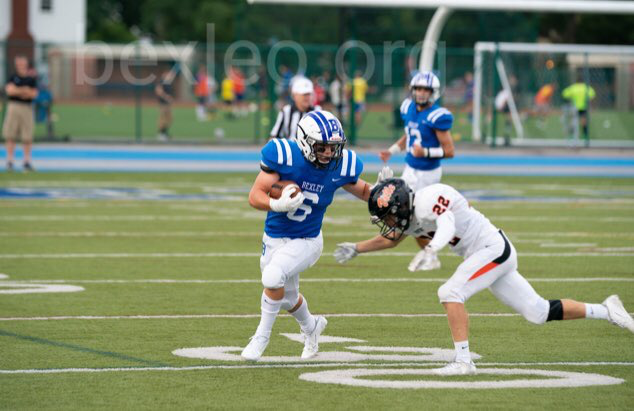 The Bexley Lions picked up a big 2nd win of the season Friday night against league foe Liberty Union. The Lions jumped out to an early 7-0 lead in the first quarter on a 49 yard touchdown run by Senior Patrick Beck. Early in the second quarter the Lions extended their lead to 14-0 after a long drive that was capped off by a 1 yard touchdown run by Freshman Quarterback Jonathan Spiess. Liberty Union was able to get on the board early in the third quarter to cut the Lions lead to 14-6. Senior Troy Redman was able to break through for a 37 yard touchdown run in the middle of the fourth quarter to extend the Lions lead to 21-6. Liberty Union was able to march down the field with 3 minutes left and scored to cut the their deficit to 21-12, but Sophomore Linebacker Noah Lyons made a big play at the goal line to prevent the 2-point conversion, which kept it a two score game. The win for the Lions moves them to 2-3 on the season. They travel to Buckeye Valley next friday night at 7pm for another big MSL-Ohio matchup.